skip to main | skip to sidebar

Last Monday I took the flight from the new Airport of Hyderabad located at Shamshabad. Hyderabad Airport is the first project to be completed amongst the running public private partnership projects in our country for modernization of airports. Bangalore Airport is also expected to be ready latest by second week of May.
True to the expectations, Hyderabad Airport is an absolute marvel. Its a terrific example of how successful a public private partnerships can be. Built by GMR Group, the Hyderabad airport located at Shamshabad got the clearance for commercial operations on the midnight of 23rd March 2008 with the first flight of Lufthansa arriving shortly. The new airport has led to the closure of 73 years old Begumpet Airport which was situated in the heart of city.
The new airport is close to 40 KM from any point in Hyderabad. HUDA is still in the process of building the required infrastructure in terms of expressway so as to ensure that the distance is covered in least possible time. The nearest point for the new airport is Chandryangutta X Roads from where the distance to airport is close to 15 KMs and there are clear sign boards and directions.
Infrastructure in the airport is truly world class and can be compared to the Dubai and Malaysian airports and probably the first of its kind in our country. A huge concourse each for the departure and arrival. Electronic baggage services akin to the international standards. Longest runway in the country in excess of 4.5 KM and capable of supporting the AIRBUS A380 as well. There are more tha 44 gates available for the passengers and different airlines together with LCD screens displaying the departure and arrival of flights at all times. The new airport, with world-class facilities, can initially handle 12 million passengers and 100,000 tonnes of cargo annually. The cost of the first phase of the project is Rs 2,478 crore. The Rs.25 billion airport with the longest runway in Southeast Asia has been built by GHIAL, a joint venture in which GMR Infrastructure Ltd holds 63 percent, Malaysia Airports Holding Berhad 11 percent, AAI 13 percent and the Andhra Pradesh government 13 percent.
Inspite of poor connectivity to the airport currently being served only by radio cabs, coaches and taxis, people have said that the airport is in comparison to Dubai and London. Significantly higher ground handling fees and user development fees were the main reason for the Airport to be operational from 14th of March which was its scheduled date.
Built by the China State Construction Engineering (Hong Kong), it is the first airport in India to have no demarcation between international and domestic terminals, making passenger movement easier. It also has a unique airport village with commercial space where passengers can meet with their friends and relatives. The airport has a 70-metre-high Air Traffic Control (ATC), equipped with the state-of-the-art equipment, a world-class cargo terminal, 42 aircraft parking stands with 12 aero-bridges and 30 remote parking bays. It incorporates the novel ‘aerotropolis’ concept on the lines of Seoul, Munich and Hong Kong international airports that houses hotels, commercial centres, hospitals and residential quarters.
All in all, the new airport at Hyderabad, truly speaks of the Infrastructure which is coming up in India inspite of ever increasing stories of slowdown. Hyderabad airport sets a superb example for other airports to follow. Soon to be commissioned Bangalore airport is also expected to be on the similar lines. Lets hope GMR is able to garner its share of profit out of this project.

yeshasvi, i would like to ask you one thing. How much time it took for you to reach the airport and how much time it took for you to pick ur baggage and how many baggage conveyors are there and how many flights baggage arrived at the time of your baggage clearance? did u had any registered baggage?how much it costed u to have snack inside and how do u find the facilities at the airport. I think, longest runway, high ATC tower, huge cargo building will not make the passenger feel comfortable...right?

Dear Anon, If you want to enjoy cheap snack, cutting chai and overcrowded infrastructure, please take the train for your next trip. I like clean facilities, well mannered people and efficient operations. This is only possible if you pay for those services.
Yes, The new airport is 30 km away from the city, But the good side of it is that it reduced noise pollution in the city. I have not read a single person write good things about first world infrastructure. This just says how shallow their concerns are.
If you want 24 hr electricity, you have to pay for it. It's not going to come from no where. If you want clean streets ( like Singapore) you have to pay your taxes first. Then only the city can put a sweeper to clean it. So moral of the story is : Indians demand/voice their "rights" without even thinking about "responsibilities". That's shameless.
If a person goes to foreign country, he/she has no issues paying 3 dollars for the coffee but he/she can be seen bargaining with a vegetable vendor in Indian market for 1 rupee. My God !

The attitude of the Indian is so frikking negative and self absorbed that they make me puke !

Indians just deserve polluted air/water, flooded streets and third class infrastructure. If you give them anything better, the first thing you would hear is "complaints" !

Its great they have built wonderful infrastructure. It took the airport staff 4 hours to get our bags, first saying teh bags were not sent in the flight and then saying they found them and all that. Bottom line is people who work need to be honest to their jobs and they have to manage them go the process going smoothly. All the other wonderful facilities and structures are much less important.

The article published by yeshasvi is good & informative.

The other discussions about the facilities are too contradicting. The globalindian who published his openion by critisizing indian mentalities seems to be an NRI or a foreigner.

Most of the people going abroad on official assignments (or) on work permits are from middle class / even below middle class youngsters with their talent. Who ever publish their openion's here.. kindly keep this in mind.

Until unless some one raises their voice, nothing will really happen here. That is there in every developing countries. Raising voice is a social responsibility. Not raising voice is shameless.

Really objectionable statement made by globalindian here is what Indians deserve. Keep your emotion with you but don't try to publish such a shameful statements anywhere any time.

Hi Telugu/GlobalIndian,
Are you born with golden spoon in your mouth, as a human being it is shameful to comment on people or countries.. I think you are forgetting that you are a human being...be conscious when you give such comments....

I feel sorry that you are bought up in this way...change your self..I think you should first repect yourself before you respect others.....

the corruption is high in this airport at the time of check-in they asked for money if not they would send back.. the guy who asked money from me is seeing like 60 years man..they are asking money on face..it is too bad.. and we cant tell them in words.. bloody people..

hello guys
1.it appears to me that u all are confused between infrastructure development,work ethics and service utility.
2. First of all one must understand that infrastructure is created with a motive to cater for futuristic requirement. in this case by building a 70 M tall tower, GMR has catered for a requirement of additional runway which they may construct behind the tower,in case the present runway crosses the ultimate traffic congestion i.e one landing and a take off every two minutes.
3.The longest runway is constructed with a view to have more number of rapid exit way for aircrafts and to ensure the runway occupancy time to the minimum. this assist in ensuring Expeditious flow of Air traffic and ensuring safety of passenger on board.
4.As far as the Work ethics is concerned i have also utilized the services of the same air port and i found every thing exceptionally managed.
5.As far as the distance form hyderabad is concerned ,this helps a lot in flight safety of aircraft from birds .so it is a very prudent step to construct infrastructure at such a distance ,,this helps in creating the assets to meet the professional requirement,.

Yashasvi Arun
New York, New York, United States
An expert in Derivatives Technology with a focus on Quants and a quizzing freak with a passion for taglines 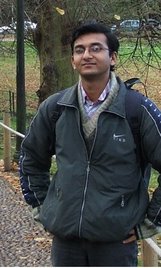 You are Visitor Number